Trucks are becoming more and more popular these days, so it’s no wonder that even luxury carmakers tend to have something in the offer. We have already seen a luxury truck from Mercedes-Benz, called X-Class, so we can expect to see something similar from Infiniti as well. At this point, it is just a rumor, so don’t expect to see a production model in the near future. On the other side, we could easily see an Infiniti Pickup Truck Concept in the next couple of years. This would be some kind of an introduction to Nissan’s next-generation truck, and this luxurious layout would eventually become reserved for those who want to drive a truck in a more luxurious way.

It is still early to talk about details, but we can speculate about the most basic design characteristics. Of course, the first thing that comes to mind is the platform. Already here, we can find a lot of opposite reports. While some sources suggest a car-like, unibody platform, most experts still believe that the Infiniti Pickup Truck Concept will come in a more traditional manner, with a typical body-on-frame platform. However, they can’t agree about the exact architecture. On one side, we could see it based on the current Navara, as this platform already proved itself as an excellent solution for luxury trucks, such as Mercedes-Benz X-Class. On the other side, it sounds logical to expect something completely new from a concept vehicle. Therefore, we could easily see a completely new architecture, which would be used for future Nissan Models as well.

Another question that comes to mind is the size. Most likely, Nissan will cut expenses and design a new platform to be modular. This means it would be used for both Frontier and Titan models. When it comes to Infiniti Pickup Truck Concept, we presume it won’t be a full-size truck. It will rather belong to a mid-size segment, so we could also see a lot of similarities with the X-Class. In any case, we count on a pretty distinctive design approach.

By this, we mean a lot of futuristic details, while the overall shape should accentuate rugged construction and body-on-frame platform. That would mean an angular overall shape, with lots of sharp shapes and similar things.

Overall, this truck will put comfort in the focus, so we presume crew cab design is the body style we should expect from the Infiniti Pickup Truck Concept.

It seems way to early to speculate about the interior design. Still, we may presume that the new model will come with a pretty luxurious cabin, full of hi-quality materials. However, a more interesting thing will definitely be the overall interior styling, which is expected to look very futuristic. The cabin should be very spacious. As we already mentioned, a crew cab layout is what we expect to see.

Once again, it is early to talk about specs. Moreover, the engine is not that important in a concept vehicle, unless there is something new to be presented. According to some reports, Nissan sees this concept as a perfect opportunity to present some of its new technologies. That could easily mean a new, electrified drivetrain. Of course, we won’t see an all-electric model, but a plug-in hybrid seems very likely. Still, don’t be surprised if you see a just a typical V6 gasoline engine under the hood. That would probably be a familiar 3.0-liter twin-turbo unit.

While the production model is probably still far away, the Infiniti Pickup Truck Concept may come earlier than you would probably think. It may even hit some major car show in the next year. 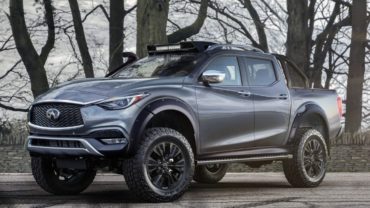