The Navara-based pickup truck from Renault has been around for about three years and while sales numbers seem okay for a brand-new model, the French manufacturer allegedly plans a big update for the next year. In order to boost sales and establish a better position on the market, the 2021 Renault Alaskan will come with several novelties, if we can rely on rumors. According to them, we will see a facelift, which will bring new styling, along with several interior novelties.

However, the fact is that we haven’t heard anything from the officials. All these reports that suggest changes for the next year are based on rumors. So, take the following paragraphs with a big reserve. With changes or not, the 2021 Renault Alaskan will probably hit the market in the last quarter of the year.

While some reports suggest that the 2021 Renault Alaskan will receive a major refresh, we have no doubt that base design characteristics will remain the same. The overall design is heavily based on Nissan Navara, while the bigger differences can be found only in terms of styling. That’s exactly where the next-year model could come with further changes. Of course, we are talking about the front end, considering that the rest of the truck is pretty much the same as the Japanese sibling.

Therefore, what we can see are changes at the front. This particularly refers to the grille design and bumper, while some changes on headlights are possible as well. Of course, we also count on those typical facelift updates, such as new color options, new wheels and similar things. On the other side, the mechanical aspect of the truck will remain pretty much untouched.

Changes on the inside should also come, reports say. While many Renault fans were delighted to see a pickup truck, many were disappointed with the fact that the cabin was identical to Navara. Practically, the steering wheel is the only different part of the whole cabin. It looks like this will change for the 2021 Renault Alaskan. Some sources suggest we might see a couple of tweaks in terms of the dashboard design, though details are still unavailable. Furthermore, we count on big novelties in terms of tech features. One of the things that come to mind is a new infotainment system. It would bring a new, bigger touchscreen, new software and many other improvements. Several more additions to the list of standard equipment are expected, though it’s still early to talk about details.

While various kinds of novelties are on the way for 2021 Renault Alaskan, it looks like things under the hood are about to remain the same. This means you may count on the same inline-four turbodiesel. We are talking about a pretty familiar 2.3-liter dCi engine, which comes in two output versions. Base models feature less power, around 160 horses, which is still more than decent for the class. In higher trim levels, you can get a more powerful version with around 190 horsepower, which provides really good performances, both in terms of acceleration and working capabilities. This version can tow nearly 3.5 tons.

We expect to see 2021 Renault Alaskan sometime in the last quarter of the year. Despite the potential changes, it won’t arrive any earlier than usual. We don’t expect bigger changes in terms of price either. So, UK models should start around 25.000 pounds, while models on the European market should feature starting price around 30.000 Euro. When it comes to the competition, key players in this segment are models like Toyota Hilux, Mitsubishi L200, Isuzu D-Max etc. 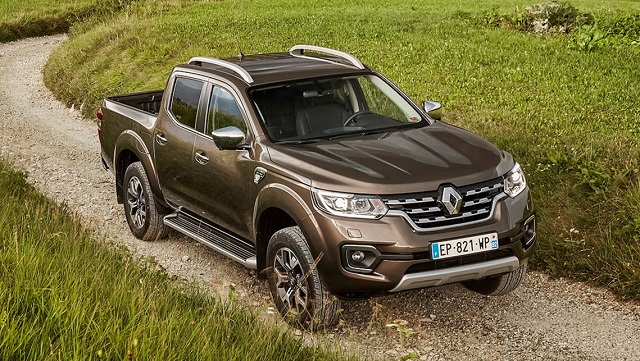