A year ago, we saw a rendering of the BMW X7 pickup truck and these days it finally became obvious that there is no chance for serial production. According to the latest reports, this was nothing more than an interesting project of the Concept Vehicle Construction and Model Technology division from Munich. After all, this is not the first time that the Bavarian carmaker is playing with pickup design.

In the past, we saw ute versions of M3 sedan for a couple of times. Still, this was something much bigger, a much more demanding project. It will once again serve as a show-off concept of the German sports carmaker. Still, that doesn’t mean we shouldn’t fantasize about this pickup and make some prediction about how the production version would look like.

If we look at the rendering photos, it’s not hard to presume how the production version would look like. The BMW X7 Pickup Truck would come with a familiar design. As the name says, this truck would be based on the new flagship SUV, which is pretty large. Still, the new truck would be even larger, with even more inches in the wheelbase. Visuall, the front end wouldn’t be much different from the new SUV, while the rest of the vehicle would come in a typical truck manner.

Of course, the front face would come with the brand’s latest iteration of the famous kidney grille, which is bigger and bolder than ever. Considering the models luxurious pedigree, we would expect nothing less than a crew cab layout. The bed size would be decent as well.

Naturally, the interior would be heavily influenced by the X7 SUV. This particularly refers to the dashboard design, which should be identical. Two comfortable rows of seats and lots of luxury would be the easiest way to describe BMW X7 Pickup.

This has always been an interesting part of BMW vehicles. The BMW X7 Pickup Truck wouldn’t be an exception either. After the first rendering photos were released, we were all talking about the V8 engine, but the base version would probably feature a 3.0-liter inline-six with around 335 horsepower.

The famous 4.4-liter V8 would be optional. This unit delivers 456 horsepower in its base version. Naturally, we would expect to see the M-badged version as well. In this case, a max output would be at least 525 horsepower.

How Capable Would BMW X7 Pickup Truck Be?

The most intriguing thing about the BMW X7 Pickup Truck would be its capability. Considering that the new model would be based on the X7 SUV, it would ride on a new CLAR, unibody platform. With such design, you can’t count on any spectacular capabilities, especially in terms of towing capacity. Such a design would put the focus on comfort and driving experience. Practically, we would see something similar to Honda Ridgeline, just bigger and much more luxurious. 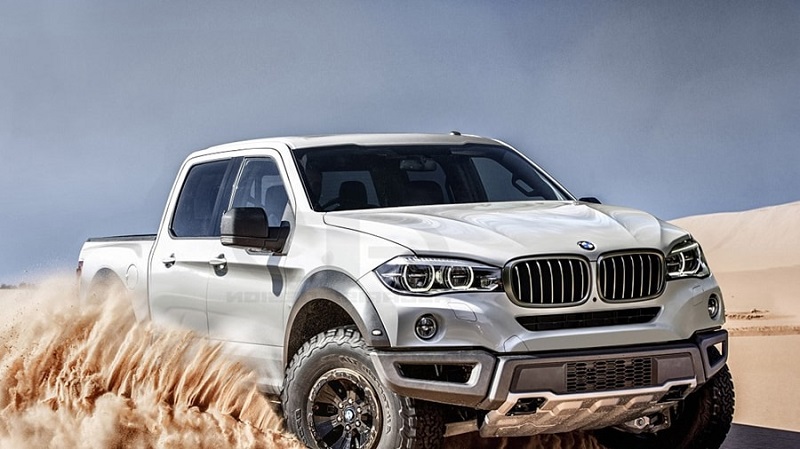