In the early 2000s, Subaru had a short but really amazing episode with a small pickup truck called Baja. It featured a little bit unusually unibody layout, but it was actually a great pickup, with great off-road performances and overall capability. So, it’s no wonder that many feel nostalgic about it and that there are various rumors that suggest its comeback. Some of them suggest we might see the new model already as the 2021 Subaru Truck, which would hit the market this or in the next year.

At this point, it’s way too early to talk about details. Still, we may presume some of the most basic things about the new 2021 Subaru Baja Truck. We presume it would stick to the original design and feature a unibody layout, as well as a compact size. Naturally, standard AWD in a combination with a new turbo-four would be the combination we want to see as well. However, the company is still quiet about this model, so take the following paragraphs with a reserve.

As we’ve just mentioned, the possible comeback would probably mean sticking to familiar design solutions. Therefore, Subaru Pickup Truck 2021 would come with a car-like, unibody platform. Of course, we are thinking of the company’s new modular architecture, which underprints pretty much everything that came from this Japanese manufacturer recently. The original model had a lot of things in common with the Outback and Legacy. So, we may expect the same thing from the new model.

Such a design approach means all the benefits of a unibody design. If you are familiar with Honda Ridgeline, which features such layout, you know that the driving experience is way superior compared to traditional BoF trucks. This truck handles better, it’s more comfortable and more fun to drive.

When it comes to the exterior layout, one of the first things we should talk about is the size. As we’ve already mentioned, Honda Ridgeline is the only model at the moment with the layout we expect to see on the new 2021 Subaru Truck. However, the new Subaru will probably be notably smaller, most likely compact in size, just like the original model. This means it will probably compete with another compact unibody truck, Hyundai Santa Cruz.

In terms of the styling, we have no doubt that the new model would stick closely to the brand’s new design language. Count on a front end that looks largely the same as models like Outback, Ascent etc. However, be sure that the 2021 Subaru Baja Pickup Truck will also come with a couple of its own details. When it comes to body styles, we are pretty sure that a double cab layout will be the only one in the offer.

This is where we definitely don’t expect to see surprises. The 2021 Subaru Truck would feature pretty much the same cabin design as related Subaru models, particularly Legacy and Outback. That’s definitely a great thing, considering that the recent redesign of these models has brought significant improvements in all aspects, including more attractive aesthetics, finer materials and much more opulence in total. We expect the same from this model, which also means loads of standard equipment, especially in terms of standard safety features.

As we already mentioned, we expect the new model will come in a double cab layout. The front seats will definitely be spacious and comfortable, while the second row should be decent, adult-friendly as well.  Behind the cabin, you may count on a cargo bed, which won’t be too big for sure, but should be practical enough for all kinds of daily tasks.

This aspect shouldn’t bring any surprise, as we count on two familiar engine options in the offer. Base models would come with a familiar 2.5-liter four-cylinder unit, which puts around 182 horsepower and comes in pair with CVT. Such amount of power would be enough for daily rides, while a good fuel economy would be one of its strong points. Theirs is no need to mention that AWD will be standard across the whole lineup.

On the other side, the higher trim level would probably come with a new 2.4-liter turbo-four. It has been introduced with the new Ascent a couple of years ago. It is a pretty efficient unit, which features a max output of 260 horsepower and 277 pound-feet of torque, which is the power that provides excellent driving dynamics, even in much heavier vehicles.

At this point, the 2021 Subaru Truck is just a rumor. However, many rumors suggest this model might arrive already in the next year. At this point, the company is still quiet, so take these rumors with a reserve. If it arrives, we presume that base models would go around 30.000 dollars. 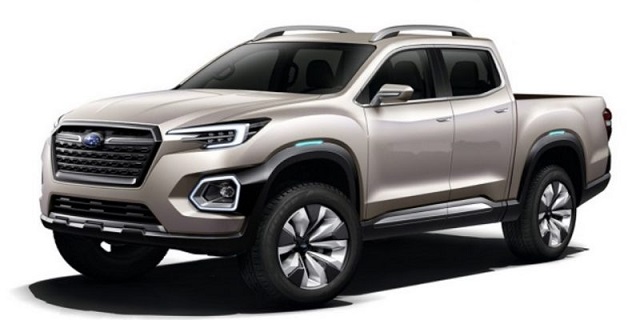